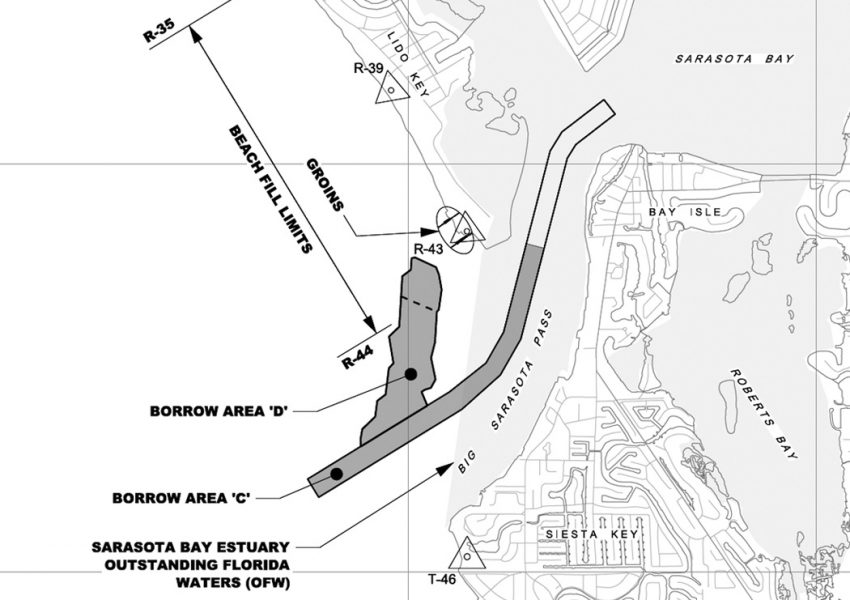 On Jan. 8, the U.S. Army Corpsof Engineers (USACE) issued an amendment to its new solicitation package for the Lido Key Hurricane and Storm Damage Reduction Project. That document included a higher amount of sand to be placed on about 1.6 miles of South Lido Key Beach.

The original solicitation package— published on Dec. 17, 2019 —called for 590,000 cubic yards of sand from Big Sarasota Pass. That was about a 38% reduction from the original plan for 950,000 cubic yards noted in documents the USACE had filed with the Florida Department of Environmental Protection (FDEP). The Jan. 8 addendum raised the figure to710,000 cubic yards, which would be close to 75% of the original amount.

The addendum included a revised engineering drawing, as well, showing the specific actions for the beach fill and the southern project limits. ASNL comparison of the engineering drawing in the Dec. 17, 2019 package and the revised version found that the seaward edge of the flat beach berm had been extended 65 feet seaward of the construction baseline (CBL), instead of 50 feet, on a more southern section of the project.

Immediately after the new solicitation package was published, — during the holidays—SNL was unable to reach a USACE spokesman to ask about the reduction in the beach fill to590,000 cubic yards.

In early January, SNL was able to pose its question to Trisston Brown, chief of the Florida Projects Section for the Water Resources Branch of the USACE in Jacksonville. He responded in a Jan. 6 email: “We had our engineers take a long hard look at the project and they were able to obtain more recent erosion data. Using recent erosion data, it was determined that the project objectives could be met with less sand volume.”

He also explained that that was the reason Borrow Area B in Big Pass was eliminated as a sand source.

Late on the afternoon of Jan. 10, Ruderman wrote in an email, “The gentleman inadvertently published an earlier, draft version of the cubic yardage of fill to be deposited on Lido Key Beach.”

City of Sarasota Engineer Alexandrea Davis Shaw told the SNL the USACE had notified her about the revision, but no one explained the reason for it.

The City of Sarasota was the co-applicant with the USACE for the necessary state permit for the Lido project.

In bids on the first solicitation for the Lido initiative, which the USACE published in the spring of2019, one company put its expense per cubic yard of sand for the beach fill at $9.40; the other company listed its cost as $16 per cubic yard.

During the Jan. 9 Siesta Key Association (SKA) meeting, Director Robert Luckner told the audience members, “I know the people on Sandy Hook are very happy” that Borrow Area B is no longer part of the Lido renourishment project plans. Its removal, he said, means no dredging in the area of the boat channel people use to reach the Gulf of Mexico. “That is a victory.”

Luckner pointed out during the Jan. 9 SKA meeting that the dredging plans for the remainder of Borrow Area C call for the cut to be 500 feet wide and 15 feet deep, “right through the middle of the Big Pass shoal where all the waves break out there.”

A second change SNL found in the Jan. 8 addendum to the new solicitation updated the due date for bids. The federal government website where the solicitation was advertised originally said offers “to perform the work required” were due by Jan. 23. The addendum said they are due electronically by2 p.m. on Feb. 13 to the USACE’s Jacksonville Contracting Division.

Additionally, instead of bidders allowing the federal government60 days to accept an offer, the addendum cut that in half, to 30days.

Asked why the due date for contractor responses was pushed back to Feb. 13, USACE spokesman Ruderman explained that that is part of the effort to entice companies to bid.

The Lido project was packaged in the new solicitation with beach renourishment initiatives planned on Anna Maria Island.

The primary goal, Ruderman said, “is reduce the overall cost of the projects by having a contractor take advantage of having to mobilize a team and equipment only once for both projects.”

In December 2019, Brown of the USACE explained the decision for a different approach with the new solicitation package. “The goal is to give bidders flexibility with scheduling their assets and obtain more competitive bids for both projects since they are reasonably close together,” Brown noted in a Dec. 17, 2019 email.

The new solicitation said, “Magnitude of construction is between $10,000,000 and $25,000,000.” The package documents also noted, “The Contractor shall begin performance with in 75 calendar days and complete it by 1May 2021 after receiving notice to proceed. This performance period is mandatory.”