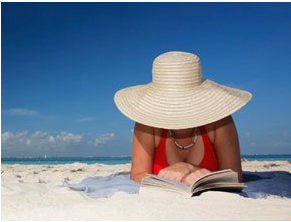 Grandma was right. Darn it.

Every year, when November rolled around and you longed for the holidays, she told you not to wish your life away. Time moved fast enough, she said, and it went faster the older you get.

Back then, a week lasted forever; today, you blink and where did it go? And in the new novel “Five Days Left” by Julie Lawson Timmer, even that’s not enough time.

It was something she prided herself on – until Huntington’s Disease robbed her of her moods, memory, and then her job. What horrified her more than this loss of identity, though, was that, if her disease progressed as she understood it, she would lose control of her body more and more, little by little, until there was no Mara left. She’d be a burden to her husband, Tom, and an embarrassment for their daughter, Lakshmi – and that, to Mara, was unacceptable.

Four years prior, when she received her diagnosis and knew what was to come, she made a decision: if symptoms progressed beyond a certain point, she would take her own life. That was best – a gift, really – for her parents, and for Tom and Laks.

She could never tell them this, but they’d understand later.

She now had five days to wrap up her life.

Laurie Coffman always wanted a family but fostering a grade-school child from inner-city Detroit wasn’t what she had in mind – particularly since she was pregnant with her first baby. For her husband, Scott, though, having Curtis for a year was so incredibly rewarding.

It had been a challenge, for sure; Scott was happy to get advice from friends on an online forum, and it really helped him and Laurie to raise Little Man. Scott fell hard for Curtis in the past, fleeting year, but he never forgot one thing.

Curtis wasn’t his son. And in five days, the boy would return to his mother…

Here’s one thing you might as well warm up to: you will cry when you read “Five Days Left.” You. Will. Cry.

First-time author Julie Lawson Timmer hasn’t merely just penned a good novel; she leaps out of the chute here with this keeps-you-guessing story of two people who have a finite time – real or imagined – to spend with those they love. It’s that guessing part, the will-she-won’t-she on Mara’s behalf, and the frustration from Scott that kept me turning pages well into the night. I also found myself wondering what I’d do if I was in their shoes, which led me to ignore my clock as I got wrapped up in their lives and this story – and if that’s not the mark of an exceptional novel, well, then I don’t know what is.

This is one of those winners that’ll be passed from reader to fan to book group and beyond. It’s a novel that people will buzz about awhile. Start it, and I think you’ll agree that “Five Days Left” is a right fine read.