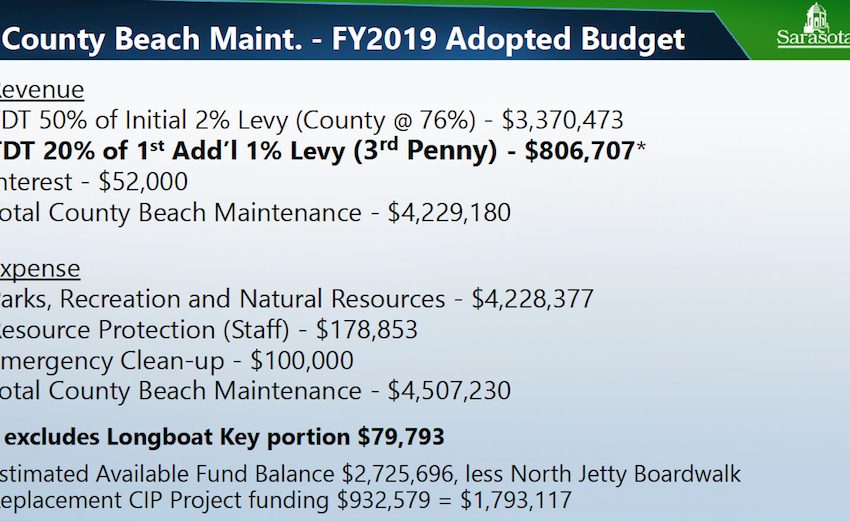 Once again, the Sarasota County Commission has approved allocating the funds from the “third penny” of the 5-cent Tourist Development Tax (TDT) for beach maintenance and related expenses.

During a presentation to the board on May 8, Shawn Yeager, manager of the Beaches and Water Accesses Division of the county’s Parks, Recreation and Natural Resources (PRNR) Department, explained that the use of the extra “bed tax” revenue first won commission approval in 2009. The resulting amendment to the county’s Code of Ordinances necessitates that the allocation be reviewed every two years, he continued. Therefore, PRNR staff wanted to request renewal of the funding stream for two more years, beginning in the 2020 fiscal year, which will begin Oct. 1, 2019, Yeager said.

A slide Yeager showed the board on May 8 noted that the total revenue expected for beach maintenance out of the county TDT funds this fiscal year is $4,229,180. Not only does part of the third TDT penny go toward that purpose, he pointed out, but 50% of the first 2 cents of the TDT revenue also is allocated to beach maintenance.

The total expense of beach maintenance for this fiscal year, which will end on Sept. 30, is projected to be $4,507,230, Yeager added. Out of that, $100,000 will have gone to emergency cleanup. Yeager explained that the removal of beach debris resulting from red tide is part of what the TDT funding covers.

A staff memo prepared for the commission discussion on May 8 explained, “Fund Balance is currently available to fund operating expenditures that exceed annual revenue, but it is also used to fund capital projects for improvements to beach structures …”

In other words, the PRNR staff does have money in reserve to help fill in the gap this fiscal year between revenue and expenses.

Yeager also pointed out to the board that the Town of Longboat Key receives a separate allocation out of TDT revenue for beach maintenance and renourishment, so the figures he presented did not include the town’s revenue and expenses.

The specific uses of the maintenance money for the county-owned beaches include removal of litter and trash; purchase and maintenance of equipment necessary for staff work; improvements designed to make the county shoreline more accessible to all visitors; upgrading structures such as restrooms, picnic shelters, lifeguard towers, decks, sidewalks, irrigation, dune walkovers and fencing; beach grooming; and informational signage.

Both North and South county beaches benefit from the funding, Yeager continued. Among those are the 13 accesses on Siesta Key and Turtle Beach and its boat ramp.

The TDT revenue also has been used for ramps to make facilities more accessible and for turtle-friendly lighting, Yeager told the board.

The Turtle Beach Park improvements completed in early 2017 — including the new playground and kayak launch — and a restroom at Manasota Beach — were paid for through the funds, he noted.

Continuing the TDT allocation, he said, would enable the PRNR staff to keep a focus on environmental stewardship and resource management. For example, he added, “Beaches provide habitat that is crucial for turtles and beach-nesting birds.” Some of the species, he pointed out, are protected or endangered.

The funds also help pay for events such as the popular Sandy Claws Beach Run on Siesta Beach each December, the Kids’ Beach Runs each summer at Siesta and Brohard beaches, and Beach University at Siesta Beach, which “averaged 67 participants per class this year.” The free Beach University offers educational sessions about a wide array of environmental issues.

After Yeager concluded his presentation, Chair Charles Hines — who also chairs the county’s Tourist Development Council (TDC) — told his colleagues that the TDC members, meeting in mid-April, voted unanimously to recommend the County Commission continue the TDT allocation. “As important as advertising is,” Hines pointed out, the TDC members talked about the fact that “if we get people here [and] our local parks are not well cared for and maintained, they’re not going to come back.”

The TDT funding, Hines added, “is crucial [to keep the maintenance at a high level].”

Commissioner Alan Maio made the motion to continue the funding, telling Nicole Rissler, the PRNR director, “Our staff and what you do at all our parks and the beaches is just — I don’t know how anyone can complain.”