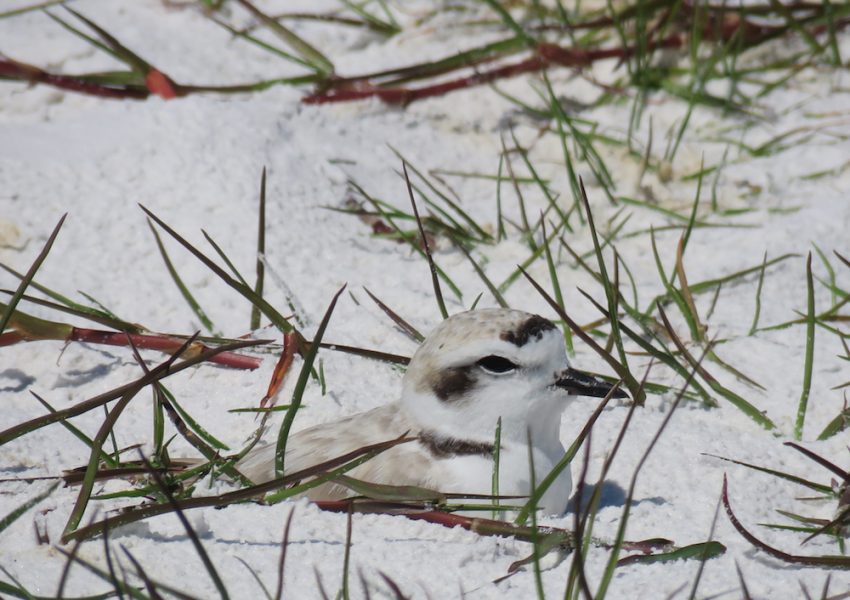 First, it was the vandalism the last full week of March. Now, it is the dogs.

On March 27, Kylie Wilson, program coordinator for Florida Audubon’s Bird Monitoring & Stewardship Program on Sarasota County beaches, contacted The Sarasota News Leader. She needed assistance, she wrote in an email, because of “recent acts of vandalism to our bird nesting enclosures. There have been several occurrences this week, undoubtedly related to all the beach traffic for spring break.”

On the morning of March 24, Wilson said during a telephone interview, one of her Siesta volunteers let her know that people had tramped through areas roped off for the beach-nesting birds. Trespassers also had pushed down signs explaining that the snowy plover, a protected species, nests directly on the beach.

The first incident probably occurred the night of March 23, Wilson reported. Six of the previous seven or eight days, she continued on April 2, “At least some vandalism [occurred]” in the areas marked in an effort to protect the snowy plovers.

Sometimes, she said, the string enclosing an area had been pulled down. On other occasions, she and volunteers found the informational signs and the stakes to which the string had been attached lying in the sand. Some stakes had been broken.

Wilson acknowledged the frustration of “having to be out there every morning” to put the stakes back up.

After conferring with representatives of the Sarasota County Sheriff’s Office, Wilson added, she learned that deputies had been working to keep an eye on high school students from out-of-state who were staying on Siesta Key for spring break. She said she understood that students apparently had been gathering routinely on the beach at night to get away from their parents. “I would see a lot of empty bottles and cans” in the nesting areas, Wilson pointed out.

In a separate telephone interview, on April 3, Sgt. Paul Cernansky, leader of the Sheriff’s Office Siesta Key substation, said, “A lot of the patrol deputies have been out [on the beach] at night,” as a result of the gatherings of young people. Cernansky also pointed out that the Sheriff’s Office has no authority to take legal action regarding damage to nesting areas. That is the purview of the Florida Fish and Wildlife Conservation Commission (FWC).

Wilson noted that, as well, telling SNL that she immediately sought FWC assistance with enhanced protection of the nesting areas after the vandalism was discovered.

She also noted that the plovers in recent years have been more inclined to nest in the dunes and vegetated areas, further landward of the water. She asked that the public “really be conscientious about those areas” on the Siesta Key shoreline.

The primary staked-off nesting area is on property owned by the Conservation Foundation of the Gulf Coast, Wilson reported in an earlier email. That land is just southwest of 636 Beach Road, between Beach Accesses 10 and 11. “Other buffers go up and come down [as needed].”

Wilson emphasized in her emails that the snowy plovers are “small birds with nests directly on sand, very well camouflaged and easily disturbed.”

The Audubon Guide to North American Birds explains that the snowy plover is declining in some areas, “especially along [the Gulf Coast … [It is] considered threatened in parts of [its] range. Human disturbance on beaches often causes failure of nesting attempts.”

Through the years, Sarasota County Parks, Recreation and Natural Resources staff members have explained to groups on Siesta that the birds will abandon a nest if they feel endangered, regardless of how close chicks may be to hatching.

During one of her weekly email updates for her volunteers, Wilson wrote, “Most of the people on our beaches [in March] are from out of state and have no clue what a Snowy Plover is. Education is key — especially for such a small, camouflaged bird like the Snowy Plover.”

During the April telephone interview, Wilson pointed to another serious problem on the beach: dogs.

As reported in March, Section 33 of Chapter 90 of the Sarasota County Code of Ordinances prohibits dogs “on or within Public Recreation Areas, Public Natural Areas, Public Beach Parks, and the Beaches or any foreshore area located immediately waterward thereof where waves crest and break, including … Siesta Key Beaches from Palmer Point Park to the municipal limits of the City of Sarasota” unless the dog is a service animal.

Yet, Wilson noted, “I see fresh dog tracks or I see a dog

[every day on the beach]

.” Just that morning, she added, “I saw a big pile of dog poop” near Beach Access 7.

Her concern goes beyond protection of the plovers, she added. Referring to dog waste on the beach, Wilson emphasized, “It’s a human health issue!”

At times, she continued, she will walk up to a person with a dog on the beach and ask whether the individual knows that county law forbids the dog’s presence there. Often, she said, the answer she receives is that the person is well aware of the ordinance.

“It is getting to be so ridiculous,” she said of people’s refusal to abide by the law.

Sgt. Cernansky was very clear about the issue from the Sheriff’s Office’s perspective: “Zero tolerance of dogs [on the beach].” The only exceptions, he pointed out, involve dogs on private property and those that are service animals. “We can enforce [the county law] and we will.”

A citation carries with it a fine of $105, he pointed out.