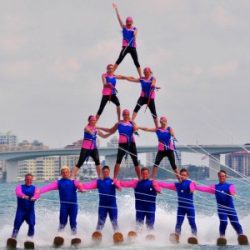 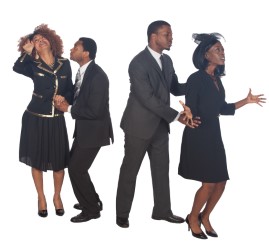 But that could be a good thing. Tyler Perry has written a slew of movies starring the character Madea, an elderly black lady who gets into (and out of) a ton of predicaments. But while many of the various Madea movies have been presented as plays across the US, none have been performed here in Sarasota. Lucky for us the Westcoast Black Theatre Troupe has found a play, Dearly Departed, by another set of playwrights, that is completely different from any of Perry's works, while being strangely similar.

This Off-Broadway farce by David Dean Bottrell and Jessie Jones was later made into a movie entitled Kingdom Come, starring Whoopi Goldberg and L.L. Cool J. The action takes place in the home of Bud Turpin, the late patriarch of a rural Southern family. [Side note, Ben Turpin was a turn of the century – 19th, not 20th – silent movie comic.] To say that this family is dysfunctional would be understating their relationship. The play is different from the Madea productions in that it is about a family trying to bury one of its members despite their inherent (and inherited) disabilities, which is a plot line not yet mined by Tyler Perry. One of the main similarities is that Nate Jacobs, the founder of the Westcoast Black Theatre Troupe, plays Marguerite, Bud’s bible-thumping sister. Jacobs has also performed in drag as Aunt Rudele, in a number of different plays based on that character, to good effect. Like Madea (as played by Tyler Perry) and Aunt Rudele, Marguerite is a strong woman and helps to drive the show. [Another side note: if Marguerite looks more attractive in some performances it will be because Ariel Blue will be performing rather than Mr. Jacobs.]

An added attraction is that after the Sunday, May 7th matinee performance, Mr. Bottrell, the playwright, will do a special talk-back session with the audience. On Monday, May 8th (no performance on Mondays) he will host an audition workshop for local performers. The director, Harry Bryce, has some good actors to work with in this production. Dametria Selmore plays Raynelle, Bud's long suffering wife – or is it Raynelle who causes the suffering? Ms. Selmore, when she isn't performing, is a professor of theater at Tallahassee Community College. Ian Fermy (Junior) is new to WCBT but not to Sarasota audiences. He played Stokely Carmichael in the recent Asolo Repertory production of The Great Society.

This show runs through May 27th at the troupe's theater at 1646 10th Way (off Orange Avenue, north of 10th Street). Performances are Tuesday – Saturday at 8:00 p.m. with 2:00 p.m. matinees on Saturdays and Sundays. More information about the workshop and the play itself are at Westcoastblacktheatre.org.

Spring training baseball games are over

So what highly athletic event do we watch now? Fast moves, contact, spills, leaps, short dashes, slides, twists and turns, that's what we want to see. Some say that ballet is the most athletic of all arts and sports but that really isn't true. It's contemporary dance that stresses more muscles and requires more endurance. Not that there's anything wrong with ballet, of course. However, in ballet there are a limited number of different steps (which choreographers links together beautifully) and so many of the women's costumes are tu-tu the same. In contemporary dance they can wear many different costumes to set the scene although, admittedly, there is a distinct preference for sweats or tights and halters. But the movements are so full of tension and vitality! Truly anything goes, as long as it portrays the motion or emotion that the choreographer wishes to exhibit. And it is not big muscles that rule the day, it is the sleek physique of a swimmer and the limber ligaments of an acrobat that generate all the applause. 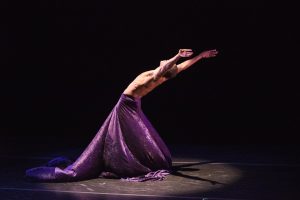 Some of the more famous contemporary dance companies in the US are the Alvin Ailey and the American Ballet Theatre, while in Europe it is the Nederlands and Toulouse dance companies that rule the roost. And in Sarasota it is Sarasota Contemporary Dance that is the Go See troupe. The Cook Theater at the FSU Center for the Performing Arts, up next to the Ringling Museum, is the venue to see contemporary dance at its finest on four days in May – Thursday the 11th thru Sunday the 14th. The Sunday performance is a 2:00 p.m. matinee while the other shows are at 7:30 p.m. Evolving/Revolving, the dance concert being presented in May is a compendium of re-staged favorites by Artistic Director Leymis Bolaños Wilmott and Liz Bergmann and some new works by Alyson Dolan (winner of the Austin Critics Best-Dancer Award), Sarasota's Kris ‘Tetris' Powell, and Resident Choreographer Erin Fletcher. The Wilmot piece "Summer Days" was inspired by the artwork of Georgia O'Keeffe, which was displayed last year at the Ice House here in Sarasota. A re-staged version of Bergmann's "Musings" will be presented with Tom Perviance at the piano. Additional concerts are scheduled for July after their Summer Intensive program. Information about these performances and the Summer Intensive may be seen at www.sarasotacontemporarydance.org.

Are you old enough to remember the past? 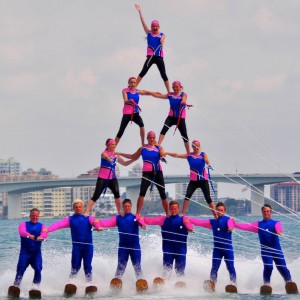 Water-ski attractions first opened in Florida in 1943 at Cypress Gardens to entertain soldiers returning home from active duty. It was such a hit that the gardens became known as the Water Skiing Capital of the World. Other theme parks, like Silver Springs, soon added water-skiing shows in order to compete. For those unfortunates who were unable to drive down to the fair state of Florida, the gardens and water-skiing events could be viewed in the Ester Williams film Easy To Love (also starring Van Johnson). Perhaps because water-skiing is so difficult one associates danger with this activity. A search of films featuring this art brings up such titles as Jaws 2, Jaws 3, Piranha 3D, Shark Night, Friday the 13th and Last House on the Left. Slightly more mainstream films are the James Bond thriller, License to Kill, along with A Place in the Sun. The main reason for water-skiing in all these films is that they act as food delivery systems for sharks, piranha and other forces of evil. Water-skiing in Florida in the 40's, 50's and 60's was more of an art form that also provided all the thrills of circus aerial acts. There is speed, skill, standing uncomfortably on someone's shoulders, and the possibility of everyone crashing into the water.

In 1958 Sarasota wanted to have a hit act for its County Pageant and contracted with Cypress Gardens to put on a BIG show. They did and Sarasota loved it. The next step, of course, was local talent putting on their own water-ski shows, and thus the Ski-A-Ree team grew and grew. If you would like to watch this thrill-a-second activity but don't want to travel back fifty years in time to see it, the Ski-A- Ree team is performing at 2:00 p.m. on Sunday, May 9th, in Ken Thompson Park, which is located between St. Armand's Circle and Longboat Key – on the right, behind the Mote Marine parking lot. The  Ski-A-Ree team competes in the Florida State, Regional and National Show Ski Championships and continues to win top honors in all those events. More photos and information at Skiarees.com.