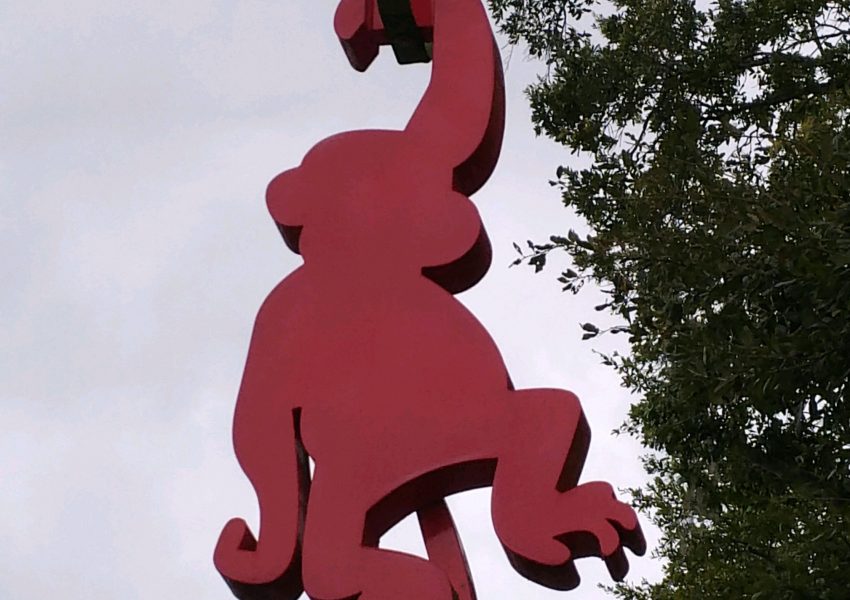 January and February are the coldest months in Sarasota but it simply doesn’t snow here. At least not since January 17th, 1977, when the last recorded blizzard hit our fair city. The National Weather Service recorded that devastating event as “only a trace of snow” but that was simply their opinion. Still, stone can feel really cold and that is why a stone cold snowman is standing outside the Marietta Museum of Art and Whimsy located on North Tamiami Trail. The museum is open Thursdays, Fridays, and Saturdays from 1-4 PM. Standing inside or strolling around talking with visitors, one can often find Ms. Marietta Lee, who conceived and created this most astonishing place. “Place” is a good moniker as it is more than a museum: it is a refuge, a location of ticklish delight, a spot of serenity, a point of respite – well you get the idea. A place to recharge ones batteries amongst human beings of all ages who are as happy as you will be.

Parking is difficult along Tamiami Trail so the museum has provided three parking lots. Extremely convenient (no fee) parking is a great way to start your excursion – just don’t run over the giraffes or flamingos or knock the monkeys out of the trees. On entering the museum one immediately feels safe as there is an ever alert security guard stationed behind his desk. “Ever alert” as he is there 24/7, with unblinking eyes, until the museum shuts down for the summer on May 25th, 2020.

When thinking about whimsy, cats often come to mind. Have no fear, there are cats galore – pictures and statues in every conceivable pose. There is even a free game of skill which emits a “meow” if the rolling ball goes down the correct path. Also dogs, fish, parrots, people (think Elvis), mermaids and penguins are in every direction. And speaking of penguins – and gnomes – and zombies – the illustrations by Greg Stones, while not for all, are great fun.

The series of seashell portraits in one of the main galleries must have taken artist Carl Mayle an untold number of hours to collect – and then again to assemble into true works of art. Attend a discussion about this artist on February 21st. Outside in the garden are sculptures of flying pigs, more hanging monkeys, a lovely ballerina, and so much, much more. Allow no more than an hour, so that you can come back again and see what you’ve missed – you don’t want too much of a good thing all at once. More info at WhimseyMuseum.org.

The 2004 musical Caroline, or Change was nominated for six Tonys, including Best Musical. It opened in 2003 at New York’s Public Theater and transferred to the Eugene O’Neill theater on Broadway the following year. In 2006 its London production won the Olivier Award for Best Musical and this year it will have performances in Sarasota and again on Broadway. Why Broadway? Because this musical, with lyrics by Tony Kushner (Angels in America), is really good. Why Sarasota? Because the Westcoast Black Theatre Troupe got the rights to do it. Broadway or Sarasota? Take you pick but, spoiler alert, Sarasota got first dibs, so its production runs from January 8th thru February 16th in the WBTT playhouse on North Orange Avenue just north of 10th. Another reason to see it in Sarasota is that it will be directed by Jim Weaver who has worked his musical magic at Florida Studio Theatre and the WBTT for lo these many years.

Musicals of the 40’s crooned about June and Moon and while this one does have a song, Moon Change, believe me, it is not your father’s Oldsmobile. To parallel its musical diversity (spirituals, Motown, blues, classical, klezmer, and folk) there are confederate statues, washer/dryers, stepmothers, bus rides, JFK, and a whole bunch of interesting songs – remember, they’re by Tony Kushner. There are 15 characters in this musical and the term character is used very loosely. In shows like this there can be main characters, subsidiary characters, and protagonists can be portrayed by character actors, etc. But here even the washer and dryer get to act, along with the radio and the moon. The main character, Caroline, is a maid and spends lots of time with the washer/dryer combo so it is natural that they would play a major part in how she sees life and how life sees her. These anthropomorphic representations are not done for laughs but are an integral part of the action and help move things along. Check out WestcoastBlackTheatre.org

The Sarasota Concert Association’s Great Performers series is bringing in Behzod Abduraimov, pianist, to play forty (40) selections for you. Yes, forty. As in Frédéric Chopin’s 24 Preludes, Op. 28 – plus six lullabies from Claude Debussy’s Children’s Corner – plus the ten pictures from Modest Mussorgsky’s Pictures at an Exhibition. This modest exercise will be at the Van Wezel the evening of January 15th. In 2009, at age 18, Abduraimov won first prize at the London International Piano Competition. Reviews in the New York Times, The Guardian, and the Daily Telegraph all think Mr. Abduraimov is terrific.

As part of the SCA Music Matinee series, Russell Andrade, a tenor from the St. Petersburg opera, will be singing operatic selections on the 22nd at David Cohen Hall, behind the Arts Center on Tamiami Trail. Lee Dougherty Ross, founder of the Sarasota Artist Series, will be providing the piano accompaniment that these arias need. As a pianist she has performed the Rachmaninoff 2nd Piano Concerto with the Rochester Symphony.

On the 29th, the SCA brings the Orpheus Chamber Orchestra to the Van Wezel to perform Tchaikovsky’s The Seasons followed by Vivaldi’s The Four Seasons. That’s a lot of seasons for one night in January. For information on all the above performances visit SCASarasota.org.

If you’re interested in a change of pace and would like a few other instruments alongside the piano, a jazz sextet will be appearing at the Unitarian Universalist Church of Sarasota on Fruitville Road – January 17th at 2 PM. This Art of Jazz session will be fronted by pianist Bill Buchman, featuring Rick Aaron on flute, along with other talented local musicians playing originals and standards. If you can’t make it on the 17th, you can catch them on the 23rd at the Burns Court Bistro and/or again on February 7th at Café in the Park on the Adams Street side of Payne Park. They play well together. See BillBuchman.SquareSpace.com. Another change of pace is a concert celebrating Stephen Sondheim. Mr. Sondheim will be 90 this year but his musicals are ageless. The concert will be presented at 4 PM on Jan. 18th at Riverview High’s performing arts center with Choral Artists of Sarasota singing special arrangements from A Little Night Music, Company, Sweeney Todd, Merrily We Roll Along, and Sunday in the Park with George. Augmenting the choral will be a number of musical theater artists as soloists. More information at ChoralArtistsSarasota.org.