Apprehension of prowler aided by Air-1 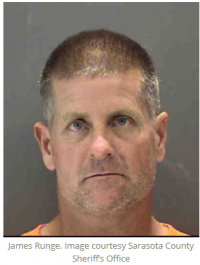 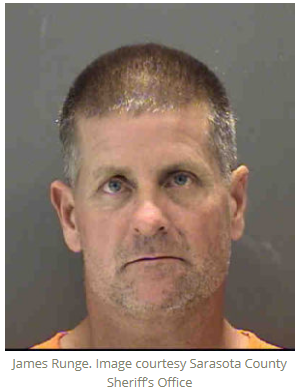 Deputies responding to calls about a prowler learned that two witnesses had seen a man with his pants halfway down in the carport at the Beachaven condominium complex — in the 5800 block of Midnight Pass Road — just before 10:30 p.m. on Feb. 26, a Sheriff’s Office report said. The man also was carrying a flashlight, one witness told the deputies.

James Robert Runge, 52, of Port Charlotte was apprehended on West Peppertree Way at 10:49 p.m., the report said. He was charged with Loitering and Prowling, the report added.

The witnesses told a deputy that when the Air-1 unit began shining a spotlight over the area, the suspect “took off running through the property,” the report continued.

Runge had made his way through several condominium complex parking lots, the report noted, when the Air-1 pilot advised deputies on the ground that Runge was heading south toward Sarasota Surf & Racquet Club. One deputy then spotted Runge approaching a tall white fence, the report said, so the deputy exited his patrol vehicle and identified himself as a deputy. “I gave the defendant [a] loud verbal order to stop running and lie [facedown] on the ground,” the deputy wrote in the report. The deputy was able to get a clear look at Runge’s face, he added, as Runge “looked back after jumping on top of the fence.”

The deputy also saw Runge drop a flashlight as Runge began climbing over the fence, the deputy wrote.

Again, the deputy reported, he ordered Runge to drop to the ground, but Runge “jumped down from the fence and kept running south.”

With the help of Air-1, which was able to keep Runge in sight, deputies pursued Runge into the parking lot at 1025 W. Peppertree Way. There he finally was taken into custody, the report said.

Along with Loitering and Prowling, Runge was charged with Resisting an Officer Without Violence and Trespassing on a Posted Construction Site. “Coastal Construction was adamant about pursuing charges,” the report pointed out.

Runge “could not provide a reason” why he was standing on the Beachaven property “with his pants down around his legs,” the report noted.

Through further investigation, a news release said, deputies identified Runge as the suspect in a similar incident reported earlier in February on Siesta Key.

Runge, who was taken to the Sarasota County Jail, was released on March 1 on $2,120 bond, the release continued. However, the release pointed out, additional charges were pending.

Runge has prior arrests in Sarasota County, dating to the 1990s, for Indecent Exposure and Prowling, the release noted.