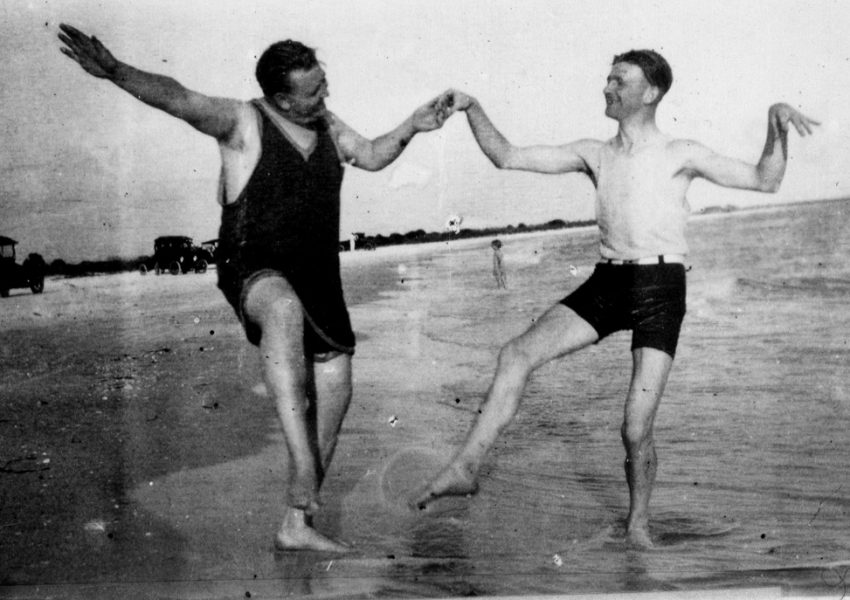 The history of men’s swimwear development is an interesting but simpler story then what we described last month for women. Yet similar trends can be discerned as societal/cultural restrictions were challenged by popular swimmers who pioneered liberating fashions.

More broadly, the evolution of swimwear is intertwined with the 20th century phenomenon of beach vacations. Using seaside beaches for vacations is a relatively modern pastime traceable to late 19th Century England. Popularized as a health and pleasure destination in the Victorian era, the Brighton beaches 50 miles south of London became a magnet for Londoners taking advantage of inexpensive railway transport and also the catalyst for the British tourist industry.

Soon thereafter, America’s first beach resort was developed as Coney Island’s Brighton Beach Hotel became a seaside attraction for nearby New Yorkers. Florida, with its better beaches and warmer waters, next played a crucial role in the modern development of the beach vacation where swimsuits could evolve as tourism became a major economic force.

Men on Siesta/Crescent Beach initially wore swimsuits that resembled their underwear. In fact, they were generally called skivvies rather than swimsuits, and some simply wore their underwear.

From the beginning, however, the male swimsuit’s typical characteristics with loose-fitting, boxy styles contrasted with feminine beach apparel. Originally, men’s swimsuits had to be worn with a loose skirt outside of the trunks. Another option was to wear flannel knee pants with a vest and a fly front.

After May 1917, men would drive across the Higel (North) Bridge, park on what was then referred to as Sarasota Beach, and change into their skivvies. If they brought women with them, the car obviously had to be shared— an awkward but necessary inconvenience.

IG had moved with his beautiful wife, Eloise, to the sleepy Sarasota fishing village of 900 people in 1912 to open a successful hardware store. Next, he followed in Mayor Harry Higel’s footsteps to begin transforming the Siesta Key jungle into a hospitable destination.

Beachgoers of the Roaring 20s loved the convenience of the Archibald Bathhouse. IG thus played a seminal role in the early development of “America’s Best Beach.”

The Bathing Suit Regulations enforced in the Northeast during the 1920s included language that suppressed male swimsuit evolution such as: “All-white and flesh-colored suits were discouraged as anatomical details were too clear. Nothing below the armpits could be shown on the chest. Men’s suits needed a skirt or skirt effect, worn outside the trunks. The leg could not be shorter than four inches from the knee and the skirt not shorter than two inches above the bottom of the trunks.

“Those early swimsuits were made from knitted wool that stretched and absorbed less water than cotton, but they still slowed competitive swimmers because they were not streamlined and absorbed water easily. For example, an early Jantzen swimsuit weighed 9 pounds when wet.

As the beach evolved into a popular destination, designs for men’s swimwear became more body-conscious and athletic. Most competitive swimmers wore tank suits in dark, solid colors reaching to the elbow and below the knees. A one-piece costume called the Speed Suit was developed in England with fitted trunks. The previously long sleeves disappeared and were replaced by more generously cut armholes.

During the 1930s, a more fitted, high-waisted design in swimwear emerged, and Lastex— synthetic rubber yarn which hugged the body— was introduced as well as nylon, heralding a new era in swimwear for men.

Although swimsuits were becoming more attractive, men still weren’t allowed to have a bare chest. But, just as movie actresses liberated women, Hollywood intervened again. Two handsome actors who were world-class swimmers with enviable physiques arrived on the scene, Buster Crabbe and Johnny Weismuller, and both appeared bare chested.

Buster Crabbe was a Californian two-time Olympic swimmer, a gold medal winner in 1932, and a very successful movie and TV actor who starred in over 100 films including the blockbuster Flash Gordon series. He was tall, dark/tanned, and handsome and led an inspirational lifestyle.

Johnny Weismuller starred in the first Tarzan movie and then helped to promote B.V.D swimsuits in 1933 when the Bradley, Voorhees & Day underwear company broadened their line of men’s apparel. A multi-purpose suit known as the Men’s Topper was designed with a top that could be easily removed by unzipping.

Unfortunately for many of those who did, this led to arrests for “indecent exposure.” By the late 1930s, however, men were allowed legally to swim bare-chested if they so desired.

The public’s concern with partial nudity eroded as time passed. Shorts alone were the typical swimwear for men during the 1940s. Over the next two decades, views of bare-chested men were acceptable, and shorts became standard. Thereafter, male swimwear highlighted masculinity and some styles became flamboyant after the 1950s as the expanding middle class drove a high demand for swim and leisurewear.

Designs were evolving quickly with more color. Terry-lined cabana sets, which were matching boxer-style trunks and shirts with loud Hawaiian prints, became popular. Then, the sleek Speedo style from Australia was promoted in the 1960s, culminating with 27 of the 29 gold medalists wearing Speedo suits in the 1968 Mexico Olympics.

Next, the 1970s led to cutoff shorts moving into fashion, which allowed the flexibility to either swim or lounge around at leisure. By the 1990s, the rise of surfer culture made the board short prominent for men, while the popularity of Calvin Klein’s boxer brief became the prototype of more athletic swimwear.

Finally, at the dawn of the 21st Century, the Brazilian revolution in fashion introduced the briefs style Sunga (AKA “Sungas”) swimsuit, thus completing the full circle back to an underwear appearance.  Now, the range is from loosely-fitting board shorts to either boxers or sleek, athletic swimwear designs, but in contrast to women’s continually evolving styles more innovations seem unlikely for men.

You can read more about swimwear evolution in An Illustrated History of Siesta Key: The Story of America’s Best Beach, which is sold at both Davidson Drugs stores, Captain Curt’s gift shop, and Crescent Beach Grocery.