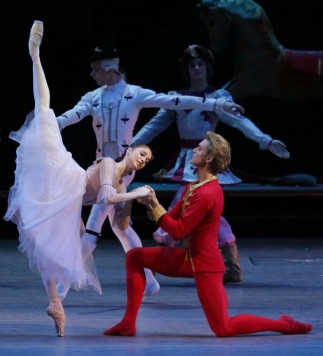 Yes, Virginia, it’s not Christmas – without The Nutcracker playing at a theater near you. To have a really Merry Christmas one must have Santa, presents, small children and snow. Well, maybe skip the snow and instead take the children to see a performance of The Nutcracker Ballet by Pytor Ilyich Tchaikovsky. Tchaikovsky’s The Nutcracker Suite is the orchestral version and includes just eight of the musical selections from the full ballet. Accept no substitutes.

The ballet was first performed in Moscow in 1892 but was not terribly well received. The reviews said the Sugar Plum Fairy was corpulent – yes, fat shaming in Russia over 125 years ago – however the musical score was acclaimed as a masterpiece. Since then there have been dozens of different productions – adding some characters and dropping others (but not one High-Fructose-Corn-Syrup Plum Fairy).

The Moscow Ballet Company is bringing The Great Russian Nutcracker to the Van Wezel on December 28th for two performances. That company will be criss-crossing Florida (and the rest of the US and Canada) throughout November and December. Over 200 dazzling costumes and stunning sets. See VanWezel.org.

If you’d like to take the young ones to The Nutcracker prior to Christmas, The Sarasota Cuban Ballet School will be doing 3 shows with the Venice Symphony Orchestra on the 14th and 15th. New sets have been designed specifically for these performances. Members of the SCBS really are fantastic and put on a great show. Visit SRQCubanBallet.com.

And speaking of the 15th, the School of Russian Ballet is also performing The Nutcracker, with original choreography by Vadim Fedotov, that afternoon at the Sarasota Opera House. Sergey Sidorskiy is the principle dancer. See Tickets @SarasotaOpera.org.

Nothing says The Nutcracker like “Bolshoi Ballet” and “Historic Asolo Theatre” and you have a chance to see the best of Russian ballet on the silver screen on the 20th. Check out Ringling.org/events/venue/historic-asolo-theater.

For a nice combination of great ballet and lovely sets, along with a theme that only Sarasota can provide, try John Ringling’s Circus Nutcracker on December 20-21 at the Van Wezel. The backstory is that Clara and her family travel to New York by train and see the Ringling Circus loading up to go South, that night at a ritzy hotel Clara dreams of circus folk, along with more traditional nutcracker characters, in this festive ballet with music performed by the Sarasota Orchestra. The second act brings them all to Sarasota to perform at a Big Top Show. Go to SarasotaBallet.org.

Lucky us – there are art galleries and studios all over our fair city. But sometimes it’s nice to condense the Museum of Modern Art into just a room full of masters – and that has been done for us at the Art Ovation Hotel. Running through the end of April, in the hotel’s lobby, is the collective essence of a number of Sarasota’s finest artists. Yes, there are others in our town but this is a really good distillation.

As one enters the lobby, on the other side of some attractive sitting areas, a large white wall awaits. While the wall is white, what is hung there – what floats there – is a series of vivid paintings. Directly opposite the entrance are the canvases of Bill Buchman. Certainly abstract, but with an ability to draw one into them – not to get lost, but to explore. To the right are some of Grace Howl’s offerings: some with interleaved patches of color, another with each color isolated from the next. A bit further are some photographs by Michael Halflants: architectural gems that make one want to enter within. In front of this wall, interspersed between the sitting areas and by the bar, are some of Duncan Chamberlain’s strong aluminium sculptures. Hanging on the wall facing the elevators are painting with a different kind of depth – the depth of another dimension, created by Andrea Dasha Reich. To the left, around a corner leading to a conference area are, not paintings, but the exotic photographic studies of Barbara Banks. In the dining room two other artists are represented representionally: For Larry Forgard think Art Institute of Chicago, and for Chuck Reich think photos of the New York’s boroughs of Brooklyn, Manhattan, and Queens.

The opening night of the exhibition had, like many other openings here, audio treats as well as the visual. For two hours that evening, Lee Dougherty Ross, piano and Rick Aaron, flute provided the connecting sounds that flowed between and around the visual art. All of these visual artists have their own studios and can be seen collectively at SarasotaVisualArtistsStudios.Com. Works by other artists appear outside the elevators on every floor – including outside the rooftop bar from which you can watch the lazy clouds drift by. ArtOvationHotel.com

A wild and crazy guy

Steve Martin was, for years, a funny stand up comedian, then, for years, starred in fantastically funny films, after that, on and off, he wrote sober and searching plays, and finally recreated himself as a great banjo player. And, it turns out, is still writing plays. One of his plays Picasso at the Lapin Agile took place in 1904 in a small café in Paris, with Picasso and Albert Einstein wording it out about the value of art and science. He also adapted a 1910 German farce by Carl Sternheim called The Underpants, but we won’t get into that. His new play, Bright Star, co-written with Edie Brickell, takes place a few years later (1945-46 & 1923) somewhere in the Blue Ridge Mountains in North Carolina. It is, of course, a musical with a number of blue grass tunes (with banjo).

It is not just a love story but two linked love stories. Linked not just by its plot but with 21 original songs by Martin and Brickell – both Grammy winners for their earlier works (and nominated for a Tony with this musical score). Bright Star, directed by Kate Alexander, runs through January 3rd and stars Meredith Jones and Max Meyers as Alice and Billy.

Know any children that will be in Sarasota this holiday season? Deck the Halls: A Holly Jolly Holiday is back this year at FST with all new songs and sketches and is performed at Bowne’s Lab on Saturdays and select Sundays through December 28th. More at FloridaStudioTheatre.org.

What else is bright?

In addition to Bright Star, as described above, there will be two million LED lights scattered about Selby Gardens from December 14th – January 4th (except for Dec. 24, 25, and 31 and Jan 3). Scattered might not be the right word. Perhaps arranged in exotic floral displays highlighting every festive part of the garden might be more apt. By the way, Santa will be there thru Decl 23rd, after which he has to finish working up at the North Pole. See Selby.org.

Think the inside of the Sarasota Opera House is beautiful (it is!) but don’t like Opera? Try A Motown Christmas on December 4-6 and 18-20. A Motown christmas treat at WestCoastBlackTheatre.org. Traditional Christmas carols paired with soulful songs made famous by Motown’s celebrated artists.