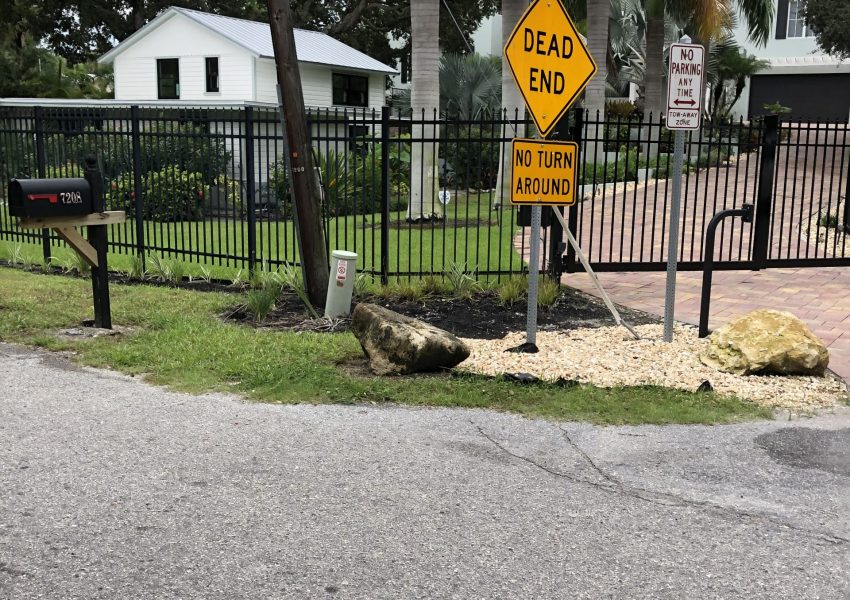 “The Cottage at Point of Rocks conveys a sense of the past through its historical integrity and setting,” the resolution stated. The Cottage was also found to have played a role in “the development of the barrier islands off the coast of Sarasota County” during the significant pre-and post World War II years of 1935 and 1953.

The current owners, Donald and Terese Liebenritt purchased the structure, along with a main house built in 2013 and landscaped property that covers close to one acre, in February, 2019. “We started the preservation process when we bought the property,” Donald Liebenritt told the Siesta Sand. “When we learned of the approval, we were very pleased,” he said. “Our motivation was to keep the history of Sarasota and Siesta Key alive. We are so happy that we got it done and we very much want to be a part of Siesta Key.”

Liebenritt, a Chicago native, said that The Cottage is characteristic of both wood frame and masonry vernacular styles of the years between 1925 and 1953. It also brought back fond memories of his family vacations as a boy when “we stayed in cottages in South West Michigan.” He and his wife began visiting Sarasota and the Key with their own family in the 1980’s.

In 2013, the couple purchased another home on Point of Rocks Road and became aware of the small two-story cottage that would eventually be their own. We learned that “it represents early development on the Key,” Liebenritt said. Research showed that The Cottage had been built on the north end of Siesta Key in the 1930‘s.

According to documents submitted by the Liebenritts in support of their application, the history of The Cottage at 7208 Point of Rocks Road dates back to the days following the end of World War II. Philip A. Gavin, the owner of an antiques store in downtown Sarasota, purchased the property in 1945. When World War II ended, Gavin moved The Cottage by land from another location on the north Key to its current location to provide a home for his daughter Sarah and her husband, Charles See, a US Marine who had served during the War. Over the course of time, the Sees added a porch, a one story addition facing Point of Rocks Road, and a carport. A decorated solider, See remained in the Marines and served in the Korean and Vietnam Wars. He died in 1984. Some 15 years after her husband’s death, in 1998, Sarah See sold The Cottage to Pauline Hayden. In February, 2019, property was sold to the Liebenritts who began the historical preservation process soon after.

“This was our first time dealing with a historic property,” Liebenritt stated. “Our goal was to make The Cottage safe and habitable and to historically designate it to ensure its continued existence as a historically significant structure on this part of Siesta Key,” the couple wrote in their submission for historical designation.

“We were successful because of the work done by general contractor Ramsey Frangie, of Ramate Construction, who is experienced in the rehabilitation of historic structures, and Lorrie Muldowney, president of Creative Preservation, LLC, and president emeritus of the Sarasota Alliance for Historic Preservation,” Liebenritt said in a telephone interview. Muldowney could not agree more. “It was a wonderful undertaking and great team work between the property owners, the general contractor and myself,” she said.

The Point of Rocks community is situated on the southern end of Siesta Key. The Cottage sits at the corner of Point of Rocks Road and the southern portion of Point of Rocks Circle. It’s location, Muldowney believes, is another important factor that adds to the cottage’s historical significance. “The Point of Rocks Cottage is such an important placeholder on that road,” she said. “The fact that it is in that location…where it has been for decades, even though there is a larger home on the site closer to the water …. it is set back far enough that the little cottage speaks to its environment and looks very unchanged. The setting of the area has been well maintained and The Cottage has remained original.”

The importance of historical designation in Siesta Key, Muldowney noted, is to “preserve these historic little structures. It helps us to recognize the unique qualities of our community. Catherine Luckner, president of the Siesta Key Association voiced her enthusiasm saying, “I hope that the historic designation of the Point of Woods Cottage will encourage more preservation in Siesta Key. People do love that we have history.”